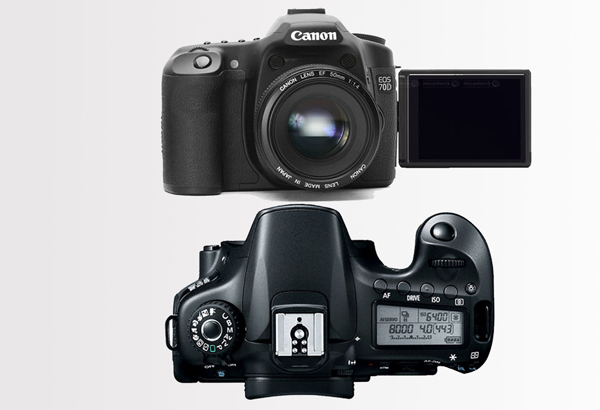 Canon is proclaiming that their new 70D will revolutionize photo and video focusing. If you have a DSLR that can shoot both photo and video you know how frustrating it is to rely on auto focus mode and how tricky it is to focus in manual mode...especially on moving targets. Well Canon's 70D has a boosted sensor pixel count to help track both still and moving objects. This can keep focus from jumping from subject to subject. You can change focusing just by tapping on the screen from one subject to another. The 70D will have a three inch articulated screen to view live video. The 70D will have 19 auto focus point as opposed to the older 60D model's 9 auto focus points. It will also feature Wi-Fi and NFC (near field communication) sharing. The 70D is planned to hit stores in September with 2 different kit lens packages and of course a body only option. The body only option is slated to retail for $1200. This easier touch screen focusing will be quickly tested by pros and amateur film makers alike. As mentioned above, it can be tricky to manual focus when shooting video on a DSLR right now. There are plenty of products out there that help with the fine tune adjustments that are sometimes needed. It takes a lot of practice to get it right. The 70D is making focusing a little more like a camcorder. I am sure we already have purists who think the best way to focus is in manual mode and we have another group who just want to have a little more fun with the video mode of their DSLR. Well, in a short time after it's release the Canon 70D will prove if this technology will truly revolutionize photo and video focusing. Hey...it works on smart phones why can't it work on a DSLR?